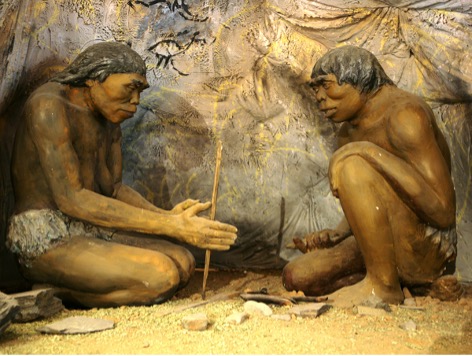 This series of innovations and inventions over the millions of years has made our lives easier. These inventions contributed to the scientific and technological advancement of the human race. These tools undoubtedly made this world a better place to live in. Here are the seven oldest inventions in human history.

The hand ax, chopping tools, and others like it are the oldest tools on display in the British Museum. The first-ever known technological invention was found in a human campsite in Tanzania, Africa. It is around 1.8 million years old.

The hard stone formation was good for cutting branches of trees, cutting meat from big animals, and smashing bones for the marrow. They were usually shaped like a pear or a teardrop, and their use spread across a wide geographical area from Africa to South Asia, the Middle East, and even Europe.

Our human ancestors learned to start and control fire during the Lower Paleolithic age, or around 300,000 years ago. Fire helped the people stay warm, keep animals at bay during the night, and of course, cook food. The earliest signs of fires made by human beings are from Gesher Benot Ya’akov, an open-air site in the Jordan Valley of Israel.

Archeologists found one of the best-preserved shoes in the Areni-1 Cave in Armenia, dating back about 5,500 years. However, according to some scholars, the evidence of shoes being worn by humans comes from the Tianyuan Cave in China, around 40,000 years ago.

Pottery fragments from Xianrendong, Chine are the earliest evidence of clay vessels. Several other clay figurines have also been excavated, and they date back to 20,000 years ago. These vessels could carry water and help for cooking stews.

It is difficult to find textiles during archeological excavations, but the earliest evidence that points to the use of cloth to make bags, baskets, and fishing nets from twisted, cut, and dyed fibers comes from the Georgian site, Dzuduzana cave. The proof of textiles is based upon circumstantial evidence in the form of loom weights, spindle whorls, and net sinkers from a fishing village. The evidence found was between 36,000 to 30,000 years old.

Perforated shell beads found from several sites in Africa and the Near East, such as the Skhul Cave in Israel (100,000 to 135,000 years ago), are the earliest art forms. A set of paint pots made from seashells was found at Blombos Cave in South Africa. Historians dated this discovery back to over 100,000 years ago. Cave paintings from the Upper Paleolithic age of Europe are also the first illustration art form (40,000 years ago).

Three thousand years before Christ, the Egyptians made paper from the papyrus plant. They invented pens and ink from soot and beeswax to write on paper. These writings are still intact and readable even after more than 5,000 years!