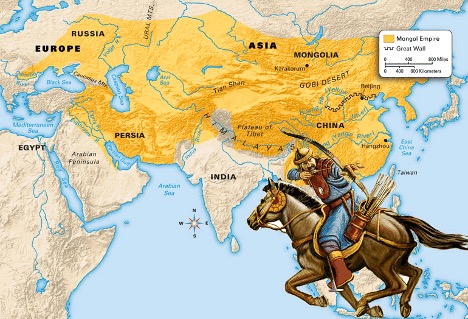 In the northeastern province of Persia, Khorasan suffered the most terrible devastation from the onslaught of the Mongol armies than any other country that the Mongols invaded. The inhumanely pillaged entire towns and villages. Read on to learn more about Genghis Khan’s conquest of Persia.

Initiation of the Conquest of Persia

On the Shah’s order, the governor of the city Otar ordered the deaths of all the members of a Mongolian trade caravan. When Genghis Khan sent three diplomats to the Shah to avoid open combat, the Shah publicly humiliated two of them and beheaded the third. This made Genghis Khan furious, and he left China and got into preparations to attack Khwarazm.

There were 100,000 men in Genghis Khan’s army. In the war that went on for around two years, Genghis Khan’s forces completely annihilated the Shah’s empire. In one of the bloodiest wars of human history, the Mongol’s massacred their enemies. Bukhara, Samarkand, and Urgench, the three leading cities of Khwarazm, were besieged and plundered, and thousands of people were executed!

When the city of Samarkand fell, the Shah, with his son Jalal-al-din and a few loyal soldiers, fled to an island in the Caspian Sea. The Shah died on the island in the December of 1220. Historians say that he died of pneumonia, and some believe that the loss of his empire caused his death.

Jalal-ad-Din, the Shah’s son, took over after his father’s death and started to assemble the remains of the Khwarazmid army in the region of Afghanistan. The two armies again met in 1221 in the spring in the town of Parwan, and the Mongols had to face a humiliating defeat. An enraged Genghis Khan himself headed to the south to face Jalal-ad-Din’s army and defeat him on the river Indus. The beaten Shah Jalal-ad-Din escaped to India.

The Aftermath of the Conquest of Persia

Genghis Khan sent troops to deal with insurgencies and revolts that were taking place in cities like Merv and Herat. Genghis Khan appointed yelu Ahai to bring back order and sovereignty in Samarkand and Bukhara. When they resolved all issues of resistance, Genghis Khan returned to Mongolia but left his garrison troops behind.

Genghis Khan, or “universal ruler,” was a military genius, enabling him to transform the Mongols into formidable horsemen and warriors. He united them and turned them into a great organized fighting force. Their speed and tactics almost invariably led them to victory even though their enemies greatly outnumbered them.

Genghis Khan’s invasion of Persia, which is modern-day Iran, left a trail of destruction everywhere. Mass killings of not only men and women but even children were common. Entire cities were burnt down to ashes, and the brutality of the Mongols was legendary. They had a reputation for killing without mercy, and the fear that their name brought was enough for some small cities and towns to surrender without any resistance.

The Death of Genghis Khan

The Mongol’s campaigning and conquest continued even after the death of Genghis Khan in 1227. Hulegu Khan, Genghis Khan’s grandson, moved to Baghdad, Iraq, in 1222. The Abbasid Caliphate in Baghdad was strong, but the Shiites, the Christian minorities, and other non-Muslims under their rule joined the invading Mongol armies and thus managed to bring to an end the 500-year-old dynasty.

From Hulegu Khan onwards, the Mongol rulers took the title of ll-Khans, which means provincial Khan or ruler. Local Khanates then ruled Persian lands as the greater Mongol Empire disintegrated.