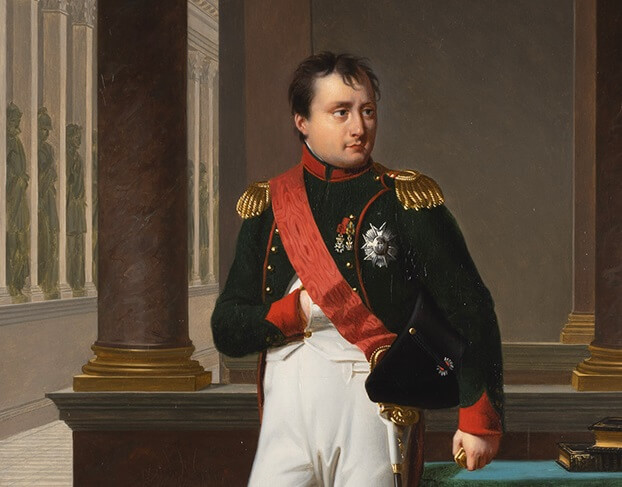 Napoleon Bonaparte, also known as Napoleon I, was a French military leader from 1769 to 1821. He seized political power in France in a military coup in 1799 and crowned himself as emperor in 1804. Napoleon invaded Europe in the early 19th century.

He invaded Europe because he thought Europe divided into nationalities would be at strife with each other. He thought it would be difficult for the states to remain at peace with each other.  Napoleon’s idea involved unifying Europe and creating the United States of Europe.

Napoleon wished to create a European system, European Code of Laws, and a European Judiciary. He wanted the French, Germans, Spanish, and Italians to coexist peacefully as a single united body. He also wanted Paris to be the world’s capital and to annex Belgium, the Netherlands, Luxembourg, and western Germany. Napoleon set up satellite kingdoms in parts of Germany, Italy, Poland, and Spain. He conquered most of Europe except Britain and the Ottoman Empire.

Napoleon’s invasion disrupted both French and European Trade.  His wars drained the energies of France, Britain, and the rest of Europe. This invasion didn’t affect America, giving the country the chance to strengthen its own economic potential, leaving Europe behind.

In 1805, Austria and Russia formed the Third Coalition and waged war against France. In response, Napoleon defeated the allied Russo-Austrian Army at Austerlitz the same year, which was a great victory.  On 21 October 1805, the British Navy defeated the Franco-Spanish Navy in the Battle of Trafalgar. This gave the British control of the seas and thus prevented France from invading Britain.

The increasing power of the French became a big concern for the other European countries.  This led to the creation of the Fourth Coalition with Russia, Saxony, Sweden, and Prussia.  In October 1806, the wars resumed.  Napoleon defeated the Prussians and the Russians, after which there was an uneasy peace.

The peace failed as the war broke out with Austria’s badly prepared Fifth Coalition in 1809.  Initially, the Austrians won a stunning victory but were quickly defeated in Wagram. Napoleon then invaded Portugal and seized Spain, its former ally. After six years of fighting with British support, the Spanish and the Portuguese revolted and expelled the French in 1814.

Russia, unwilling to bear the consequences of reduced trade routes, routinely violated the Continental System. These actions prompted Napoleon to launch a massive invasion of Russia in 1812. The resulting campaign ended in disaster and near destruction of the great French army. Encouraged by the defeat of Napoleon, Austria, Prussia, Sweden, and Russia formed the Sixth Coalition. They then started attacking France. In October 1813, they decisively defeated France in Leipzig.

End of the Invasion

The Coalition troops captured Paris at the end of March 1814. They then forced Napoleon to abdicate in April 1814. He was banished to the island of Elba; however, that didn’t last long. Napoleon escaped in February 1815 and resumed control of France for around one hundred days. The Allies, after forming the Seventh Coalition, permanently defeated Napoleon in Waterloo in June 1815.  They exiled him to Saint Helena, where he died six years later.