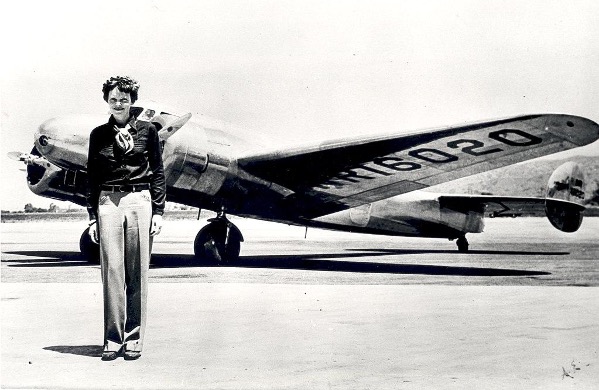 Who was she? And what happened to Amelia Earhart? This article will hopefully answer all some of your pressing questions, but the rest is simply an unsolved mystery.

Amelia Earhart was born in Kansas in on July 24th, 1897. From an early age, she was adventurous and more of a tomboy than your average girl. She loved exploring the outdoors, climbing trees, and hunting animals like rats with a rifle. As for her siblings, she had a younger sister, Grace, who she also called Pidge. Amelia loved reading and would usually spend a lot of her hours in the library at home. In 1916 she graduated from Hyde Park High School in Chicago but did not complete her college education at the Ogontz School in Pennsylvania.

Her life changed in 1920 when she took a plane ride with Frank Hawks, a World War I pilot and famous air racer. Her father paid $10 for the ten-minute ride she took, but for Amelia, it was a turning point in her life. She decided then and there that she was going to learn how to fly! However, it was not so easy.

She had to take up several jobs to pay for the flying lessons. But Amelia’s determination and perseverance helped her through. She began her training in January 1921, under the instructions of her teacher Anita ‘Neta’ Snook, and after 6 months, bought a secondhand Kinner Airster biplane. She called her plane ‘The Canary’ because of its bright yellow color. The Fédération Aéronautique Internationale issued Earhart a pilot’s license in May 1923. She was only the 16th woman in the United States to get a pilot’s license.

The Accomplishments of Amelia Earhart

Amelia set a number of world records during her career as a pilot. The first record that she holds is of being the first woman to fly solo above 14,000 feet. After her solo flight across the Atlantic Ocean, the United States Congress awarded her the Distinguished Flying Cross, an award given for heroism or extraordinary achievements in aerial flight. Earhart established the ‘Ninety-Nines,’ an international organization for the advancement of female pilots. She was also the first president of the organization of licensed pilots, who represented women pilots from around 44 countries!

Amelia Earhart wanted to become the first pilot ever to circumnavigate the globe. It was June 1st in 1937, when she, accompanied by the navigator Fred Noonan, took off from Oakland, California, on her second attempt to do so. She was flying a twin-engine Lockheed IOE Electra.

The pair flew 22,000 miles from Miami to South America, Africa, eastward to India, and then to Southeast Asia. When they arrived in Lae, New Guinea, they had only 7,000 miles left to cover before reaching back to Oakland. However, when they made their way from Lae to the tiny Howland Island, which was supposed to be their fueling stop, they lost radio contact with the ‘Itasca,’ the U.S coast guard cutter off the coast of Howland Island. Their plane disappeared, and July 2nd, the day they left Lae, was the last time anyone saw Amelia Earhart.

A search was organized by the American President Franklin D. Roosevelt for the missing pair. After two weeks of looking for the lost plane when they still hadn’t been found, they were officially declared lost at sea on July 19th, 1937. There are many different theories regarding their disappearance, but the official stance of the United States government was that Amelia Earhart and Fred Noonan’s plane crashed into the Pacific Ocean. What do you believe?