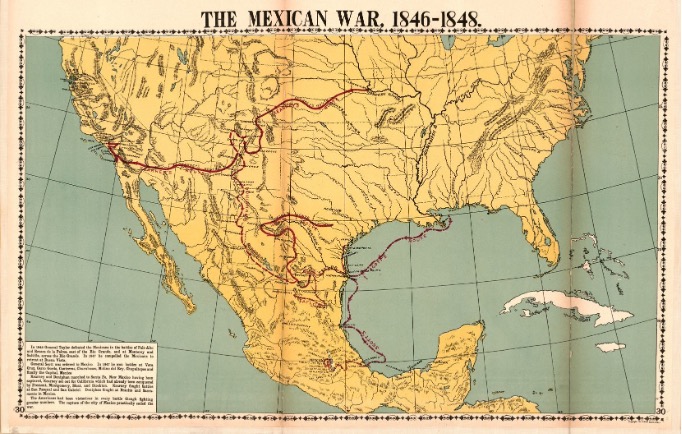 Library of Congress, McConnell's Historical maps of the United States

The Mexican-American War (1846-1848) pitted the United States against Mexico. Once US Congress voted to annex Texas in 1845, the conflict began. Let’s learn more about this significant chapter of history!

Cause of the Mexican-American War

The Mexican-American War has its roots in the Texan Revolution, which began in 1835. Numerous colonists of American origin came to settle in the region with the Mexican government’s approval. The government hoped it would protect from the Apache incursions.

However, the American colonists practiced cotton culture and slavery, whereas Mexico abolished it in 1829. Faced with an insurrection in preparation, Santa Anna, the Mexican president, sent a force to Texas to take control of the situation.

In 1837, the Texan authorities filed a petition with the American government to join the Union. But the US rejected it because they feared it would drag them into war with Mexico. Then, in 1838, with the arrival of the head of Texas, Mirabeau Bonaparte Lamar, an opponent of membership, Texas withdrew its request. A second attempt took place in 1843. However, at the initiative of the American President John Tyler, it again failed in the US Senate. It was finally under the mandate of President James Knox Polk that the annexation took place in 1845. Texas approved annexation and joined the Union on December 29, 1845.

The Mexican-American War of 1846-1848 is the first international war waged by the US in the context of Manifest Destiny. The Democratic-Republicans under the leadership of President James Polk defended this ideal. Manifest Destiny was an imperialist ideology saying that the American nation had a “divine mission” to extend civilization and democracy to the West.

Not only had Mexico not recognized the independence of Texas, but in addition, it had never formally demarcated its border with it. Also, when Texas joined the American Union, the Texas question turned into a territorial conflict between Mexico and the US.

President Polk sent a diplomat to the Mexican government to purchase upper California and New Mexico for $25 million. These territories were at the time under Mexican sovereignty. This request was left unanswered due to the political turmoil that Mexico was experiencing internally.

To support his claims on Texas, Polk sent troops to the Rio Grande region. On April 24, 1846, a clash between the two armies took place, thus opening hostilities. Polk, informed of the incident, sent a statement to Congress on May 11, which narrowly endorsed war on Mexico.

Operations took place on two main fronts, one in New Mexico and upper California and eastern Mexico. The interest of the first front was to take possession of these territories before the British took advantage of the situation to seize them. The second front had its raison d’être to invade Mexican territory. This was to force the Mexican authorities to accept the American claims.

The war lasted two years and was overall a long and impressive series of American victories. American troops ultimately led an expeditionary force to Mexico City. There, the Mexicans surrendered their arms and signed the Treaty of Guadeloupe Hidalgo on February 2, 1848, which recognized American sovereignty over Texas. It then extended to California, Nevada, Utah, New Mexico, Arizona, Colorado, Texas, Oklahoma, Kansas and Wyoming against the payment of a sum of $ 18.25 million at the time.

The results of the Mexican-American War left traces in the rest of US history. These newly gained territories had to be organized politically and within the framework of the country’s political division. Indeed, for many Northerners, this war was part of a southern plot to increase the territories in which slavery would be practiced. Many officers who served in one or the other armies went on to be the heroes of the Civil War. This war, or more precisely the annexation by the US of Mexican territories, was one of the triggers of the Civil War.